Santa Claus and Christmas-- Let the Children Feel and Embrace the Spirit of what it all means.

I wrote this blog several years ago and except for a few minor changes, I have posted it every year since.   The reason is simple. I believe in Santa Claus and I am sick of hearing these elitist-know-it-all-uppity-ups declaring that "lying" to your children about Santa Claus is wrong and traumatic and teaches the wrong lesson and blah-blah-blah. That is NONSENSE. Okay, this is  for Christmas, 2019.

Christmas with  Jesus and Santa (yes, they are tied together) is not about a day in time. No, it is about a seasonal spirit in time: a season where the spirit of kindness, and goodness, and charity, and most of all love explode around us. It is a time of wonder and miracles. Damn right I believe!

The title of this blog is It Makes Sense To Me and what follows does Make Sense to Me.  Many will feel this article makes no sense at all. Well, I don't care. The fact is, Santa Claus, is rooted in the great St. Nicholas and this 3rd-century saint, heeding the words of Christ to "sell what you own and give the money to the poor," did just that; he gave everything he had to the poor and needy. He devoted his very existence to serving God.

St. Nicholas morphed into the Santa we are familiar with today. But there is no getting away from the fact that his origin was heaven sent. The Santa Claus we know and all that goes with him has filled the hearts of children with wonder and awe since the 19th century. Why do so many folks want to take it way? Why does anyone feel the child must know the "truth". They find out soon enough what "truth" is. Believing in Santa Claus and the wonder he creates never hurt anyone. Rather, it is one of the great unheralded examples of all that is GOOD.

Therefore, It Makes Sense To Me, to share an editorial from Mr. Francis Pharcellus Church, who was an editorial writer for the old New York Sun. The editorial was about Santa Claus. It is an example of what the media people of today should be telling our children, (fat chance of that happening). It was written during a time when there were no radios, phones, televisions, iPads, smartphones or even blue-tooth. People talked to each other and used paper, pen, and pencil to message each other. Can you imagine?

What follows was written back in 1897 and, It STILL Makes Sense To Me.  Some of you might have seen this before. If you have, enjoy it again. If not, enjoy it now. It is a letter written by eight-year-old, Virginia O'Hanlon, of West 95th Street in New York City, to the newspaper asking if  Santa Claus was TRUE. Her dad had told her that if the "Sun" said it was true then it must be so. Enjoy a moment back in time when things were a bit simpler and the innocence of children was loved and respected by most 'grown-ups'. 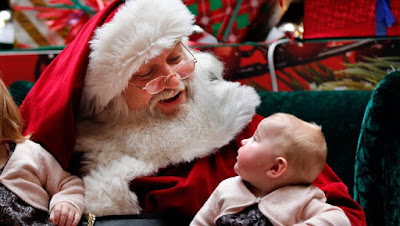 Yes Virginia, there isa Santa Claus. He exists as certainly as love and generosity and devotion exist, and you know that they abound and give to your life its highest beauty and joy. Alas! How dreary would be the world if there were no Santa Claus? It would be as dreary as if there were no Virginia. There would be no child-like faith then, no poetry, no romance to make tolerable this existence. We should have no enjoyment except in sense and sight. The eternal light with which childhood fills the world would be extinguished.

Not believe in Santa Claus! You might as well not believe in fairies! You might get your Papa to hire men to watch in all the chimneys on Christmas Eve to catch Santa Claus, but even if you did not see Santa Claus coming down, what would that prove? Nobody sees Santa Claus, but that is no sign that there is no Santa Claus. The most real things in the world are those that neither children nor men can see. Did you ever see fairies dancing on the lawn? Of course not, but that’s no proof that they are not there. Nobody can conceive or imagine all the wonders there are unseen and unseeable in the world.

You tear apart the baby’s rattle and see what makes the noise inside, but there is a veil covering the unseen world which not the strongest man, nor even the united strength of all the strongest men that ever lived, could tear apart. Only faith, fancy, poetry, love, romance, can push aside that curtain and view and picture the supernal beauty and glory beyond. Is it all real? Ah Virginia, in all this world, there is nothing else real and abiding.