Introducing my new Novel: "Horizon Homeless" reality fiction inspired from more than 20 years of experience working with the homeless and the pre-homeless.

From the beginning of Chapter 6: page 63


"Their newly discovered sense of helplessness had Bob and Tracey emotionally drained and exhausted. They had $40.00 to their name and the electricity had been turned off.  The inside of the house was hovering at about 90 degrees, the refrigerator was rapidly losing its coldness while the hot water heater was slowly losing its hotness. The stove could not be used and the washer and dryer had been temporarily relegated to useless objects just taking up space. Losing power because of a storm was one thing. Having it taken away from you on purpose by the power company was something totally different. A storm could not cause people to feel demeaned and degraded. People could." 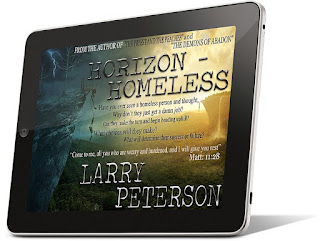 Have you ever seen a homeless person and thought, Why don’t they just get a damn job? Did you stop and think that maybe they had a job and then, through no fault of their own, they lost it. Is it possible they tried as hard as they could but could not find another job?  Did you consider that maybe there was an illness that altered their life?  Maybe pain medications prescribed for an unwanted, debilitating injury turned them into a “victim addict”? Maybe they are a vet with a severe case of PTSD?  Maybe it is certain type of mental illness? Do you know anything about that person you are looking at? We should remember that before people become homeless, they lived somewhere.

There are millions of people across this great land of ours that are pre-homeless. Please say hello to Bob and Tracey Slider and their son, Jake.  They are a composite of so many American families that cover our land from ‘sea to shining sea’. They are among the millions of unnoticed, hardworking, Americans, locked into survival mode while trying their best to do the “right thing” every day. What happens when they are confronted with circumstances which place them on a road heading downward where the horizon up ahead turns homeless?  Can they make the turn and begin heading uphill? What choices will they make? What will determine their success or failure?
“Come to me, all you who are weary and burdened, and I will give you rest” Matt: 11:28

www.larrypeterson-author.com   All my books at this link 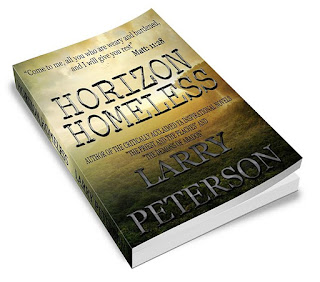 Remembering Alzheimer's Patients and their Caregivers

"Little Nellie of Holy God"--The Toddler Who Inspired a Pope*

Ellen Organ was born on August 24, 1903 in what was known as the "married quarters" of the Royal Infantry Barracks in Waterford, Ireland. Her dad, William, was a soldier in the British army. Shortly after Ellen's birth she was baptized into the faith at the Church of the Trinity. No one knows why, but from that point on Ellen Organ was called "Nellie".

Nellie's parents were both devout Catholics and her mom, Mary, had an especially deep devotion to the Blessed Mother. She would take walks with Nellie always talking about Jesus and Mary. She and her husband also made it a family custom to pray the family Rosary every day. Nellie, doing as her mom showed her,  always kissed the Crucifix and the large beads between decades. The first words she learned were "Jesus" and "Mary".

By the age of two, Nellie displayed a pronounced spirituality rarely seen in a child, especially one so young. While walking to Mass holding her dad's hand she would constantly talk about seeing "Holy God". This was something she began saying without having heard such an expression. Even her dad admitted years later he had no idea why his daughter began saying "Holy God".

Nellie's life and the lives of her brothers, Thomas, David and their sister, Mary, were about to change dramatically. Their mom became very ill with tuberculosis. Nellie, the youngest of her siblings, was by her side constantly and was actually hugging her mom when she died in January of 1907. Nellie was three years old.

The children's dad could not provide proper care for them. Consequently, he turned to his parish priest for help. Thomas, who was the oldest at age nine,  was sent to the Christian Brothers and David to the Sisters of Mercy. Mary and Nellie were taken in by the Good Shepherd Sisters in Cork City. They arrived there on May 11, 1907. The sisters treated them kindly and were very good to the girls. Nellie was happy to call all of the sisters, "Mothers."

Nellie was three years and nine months old when she arrived at the Good Shepherd Sisters home. A young girl named Mary Long, slept next to Nellie. Nellie never complained but Mary heard her crying and coughing during he night. She told the sisters and Nellie was moved to the school infirmary.

Upon examination it was discovered that Nellie had a crooked spine (the result of a serious fall) that required special care.  Sitting up was very painful for the child and sitting still for any length of time caused her great pain. Her hip and her back were out of joint. She was only three and she tried to hide her pain. But she could not "fake" feeling well. All the sisters could do was make the child as comfortable as possible.

Nellie astonished the nuns with her insight and knowledge of the Catholic faith. The sisters and others that cared for Nellie Organ believed without reservation that the child was spiritually gifted. Nellie loved to visit the chapel which she called "the House of Holy God." She referred to the tabernacle as "Holy God's lockdown."  And she embraced the Stations of the Cross. Upon being carried to each station she would burst into tears seeing how Holy God suffered for us. She also developed an acute perception of the Blessed Sacrament.

One day Nellie was given a box of beads and some string. Being a three year old she put some in her mouth and inadvertently swallowed them. People saw her gagging and choking and rushed her into the infirmary. The doctor present was able to remove the beads from Nellie's throat.

They were all amazed how brave the little girl remained as the doctor probed  into her throat removing the objects. She never made a sound. At this time it was discovered that, just like her mom,  she had advanced tuberculosis. The doctor told the sisters there was no hope for recovery and gave Nellie only a few months to live.

Nellie loved the Holy Eucharist deeply. She would ask the sisters to kiss her when they were coming back from Communion so she could share their Holy Communion. She desperately wanted to receive her First Communion. But the rule of the Church was a minimum age of 12. Nellie was only three.

Nellie told of visions she was having of "Holy God" as a child and the Blessed Mother standing nearby. Her faith was so pronounced that the Bishop agreed (since she was close to death) to confirm her. She received her Confirmation on October 8, 1907. Then, on December 6, 1907, after considering all the facts, the local bishop, in consult with the priests, allowed Nellie Organ to receive her First Holy Communion. Nellie Organ died on February 2, 1908.

Nellie Organ's story spread throughout Europe and reached the Vatican. It was presented to Pope Pius X by his Secretary of State, Cardinal Merry del Val.It was providential because the Holy Father had been looking for a reason to lower the age of receiving First Communion to the age of seven  but was not sure about doing it.


When Pius X read the documents about "Little Nellie of Holy God", he immediately took this as a sign to lower the age. The Pope immediately issued a Papal Decree called QuamSingulari, changing the age of receiving First Holy Communion from 12 years old to age seven.

Pope Pius X, who would become St. Pius X, after issuing Quam Singulari, took up his pen and wrote, “May God enrich with every blessing ---all those who recommend frequent Communion to little boys and girls, proposing Nellie as their model.”

©Copyright Larry Peterson 2017 All Right Reserved
Posted by It Makes Sense To Me at 12:30 PM 0 comments