Choosing Government over God has a Difference; One is Death, and the other is Life.


IT MAKES SENSE TO ME

“I do not hesitate to proclaim before you and before the world that all human life — from the moment of conception and through all subsequent stages — is sacred because human life is created in the image and likeness of God.”
Pope St. John Paul II

The saga of Alfie Evans sickened me. Except for two overriding factors, his death was unnecessary. First, the feigned necessity of his death is embedded within the secular practicality of a 21st-century  judicial system. Secondly, among many medical practitioners who lean on their own omniscient ability, it was in Alfie’s “best interests” to die. You see, they had to help him because he refused to do it on his own. He had become a “burden” to secularism.

I write this because I have experienced circumstances similar to Alfie’s parents. My wife was on life-support, but unlike Tom and Kate Evans, I had the task of allowing the machines to be turned off.  It was not a judge or a doctor or the courts or anything like that. It was ME,  the woman’s husband. The end result was different.

My wife, Loretta, had been ill for a long time and on April 6, 2002, she fell into a coma. By that evening she was on life support. There was a Catholic living will on file for each of us, and I signed a DNR (do not resuscitate). A DNR gave me control over life ending processes. Even though her final breaths were expected, signing the DNR was, for me, akin to signing a death warrant.

Although my wife was a middle-aged adult and Alfie was a baby, the parallels in each case are quite similar. Alfie, at the age of seven months, developed seizures and they caused him to go into a “semi-vegetative state.” Alfie did have brain function, but most doctors agreed that his condition (which they were not sure of) was incurable. Most importantly, his parent’s rights to try to save him were stripped from them by the courts.

We tried for three days to wean Loretta off the ventilator. Each time her breathing stopped in less than a minute. Six doctors told us it was “no-use.” On the third day, my grown children took turns going to their mom’s bedside to say their “good-byes.” One at a time they came from that room sobbing like babies. I was last and sat by her side, looking at her, holding her hand and saying whatever it was I was saying. Those words I do not remember. I do remember one word; I was called a “murderer” by someone in Loretta’s family.

Unlike Alfie’s parents, I had control over the machine that was doing her breathing (she had been on life-support for three weeks).  Three of the doctors were there and the chief-of-staff. I asked them to pray with us, and they all did. The machine was switched off, and the intubation tubes were removed. A minute passed by and she kept breathing. Then two minutes passed by and then five and ten and then one hour. The cardiologist said, “Don’t be fooled, she won’t make it.”

Three days later she was up in a room, and three weeks later she came home. She had earned the title of “The Miracle Woman of Northside.” Her recovery was not only baffling; it was unexplainable. Ironically, cancer killed her exactly one year later. The “murderer” comment was never retracted.

In Alfie’s case, his parents had no choice. They were invoking God along with countless others around the world.  The Pope had secured citizenship for Alfie, and the Italians were ready to transport him to Italy to be cared for. Unfortunately, in the world of the “nones,” secularists, and atheists, God is not part of the equation. He was the common denominator in ours.

Virtually every court in the U.K. ruled against the parent’s rights. The government and their “experts” knew best; Alfie must DIE. I cannot imagine standing by as my child’s life was taken from him by court order. It is incomprehensible to me.

So the state took away the parent’s right to protect their child. They subjugated Natural law and vanquished the very nucleus of any successful civilization, the family.  They pulled Alfie’s tube.  He lived for five days breathing on his own. Was that a message from above that those in charge should have tried harder?

Unfortunately for Alfie, his “quality of life” was not deemed worthy to move forward. Loretta kept breathing and did use oxygen intermittently. If the doctors were in charge of the breathing apparatus, they might have simply left it off when her breathing failed on the first day.

Unlike the Evans, we were able to take three days before we agreed to leave it off.  On the third day, she kept on breathing on her own and came out of the coma. Doctors do NOT know everything. They are definitely not equal to the God who created each and every one of them.

I can end this with one irrefutable fact. Tome and Kate Evans will go home, and when they close the door behind them, they will realize that little Alfie is gone—permanently. Therein lays the lonely heartache they will forever live with. You cannot understand that unless you too, have lived it.

Please pray for them both that within each other they find the strength to move on. What happened to them and their son was a terrible thing. 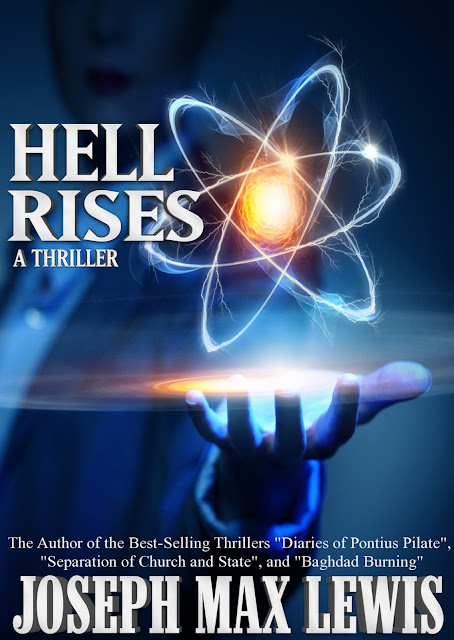 Joseph Max Lewis has written three "Best-Selling Thrillers and has now added the creme de la creme to the mix with his latest novel, "Hell Rises".

A small group of almost "invisible" people was sitting around the table. They were all powerful, influential, well-connected individuals who made up the Board of Directors of the Society for Human Enlightenment. Wealthy, polite, and impeccably dressed it was virtually impossible to grasp the truth hidden in their souls. They craved not money, nor fame. They only desired power, power over humanity. They were, each and every one of them, Satan worshippers.

The Society had been secretly using their own particle-collider to wear down the quark-gluon plasma barrier between the Earth's crust and hell. The objective was to provide the opening for the anti-christ to get to Earth. But something was beginning to interfere with their plans. They were pretty sure it was Astrophysicist, Valerie Langal. They immediately decided that she must be killed. Their "Master's" objective could not be opposed no matter what.

Join the adventure to save humanity as Valerie Langal, attempting to save the plasma barrier is hunted by the "dark-side". Be part of the team trying to save her and help her succeed.  The team is a mixed bag of professionals and includes;  Deputy Director of the CIA, Robert Cartwin; Special Agent, Ashta Lamonta; "go-to-guy, Hank Jenkins; and Director, Dannis Landsberry and many others to keep you turning the pages.

You will definitely want to read this book from end to end to see if, in fact, "Hell Rises". You will not get that answer from me and you will not find out until the end of the book. You just have to read it.  It is worth the adventure. All I can say is E N J O Y!